Though many are always trying, there are some stars that have managed to stand out above the rest.

Although virtually nonexistent a decade ago, social media marketing now plays a vital role in overall campaigns for movies and television, and when it comes to success over this unique channel, some celebrities have managed to make a far greater impact than the rest.

Among the leaders in this race are two late night talk show hosts named Jimmy.

The first is Jimmy Fallon and the second is Jimmy Kimmel. Those celebrities have found themselves in a continual race to generate the most popular social media marketing videos, posts, and other campaign elements. This helps them to encourage a larger number of viewers to pay attention to their own shows. While they’re at it, the battle between them has become quite intense.

Beyond them, other celebrities and their teams are using social media marketing to drive brand awareness.

These stars aren’t just on their own, posting at random. Many of them have complete sophisticated teams of experts that have a thorough understanding of the ways in which to draw viewers and build a brand online. Among those that are making the largest splash, at the moment, is Vin Diesel, who is currently at the top of the social world, particularly because of the Facebook presence that he has developed.

According to data released by RelishMix.com based on the number of official Facebook fans, this month, Vin Diesel has the most, with 72.3 million, with Will Smith in second place at 65.7 million. Selena Gomez has 58.1 likes from fans while Jackie Chan isn’t far behind at 55.7 million. Adam Sandler has been holding strong at 50.7 million and Megan Fox has 49.1 million. Farther down, Justin Timberlake has 34.9 million, Jennifer Lopez has 34.3 million, Taylor Lautner has 31.2 million, and Dwayne Johnson (The Rock) stands at 31.1 million.

Interestingly, the leaders on Twitter are not the same, with Justin Timberlake being the most popular with 31.8 followers. Clearly, social media marketing is a serious strategy for celebrities, and while Twitter is playing an important and growing role, Facebook remains the network where the largest number of viewers can be found.

Trends in this area are changing the skill sets required by marketers and the talent they hire.

With the explosion of the use of smartphones and the clear impact that social media marketing is now having on the shopping decisions that consumers are making, marketers are starting to require a new set of skills as they find themselves busier than ever in the attempt to use this medium to its fullest.

The use of this online and mobile marketing technique has expanded in two primary ways.

The more obvious purpose for social media marketing has been to provide businesses with a direct path that will connect them with consumers so that they can be specifically targeted. However, beyond this, there has been a considerable business to business segment that has not only taken off, but that is continuing to rapidly grow. This is requiring an entirely new tack in terms of posting and strategy, as it is having an impact on a company’s present and future customers, clients, relationships, and even talent.

The IT industry is currently evolving at a striking rate, and social media marketing is now at its heart. 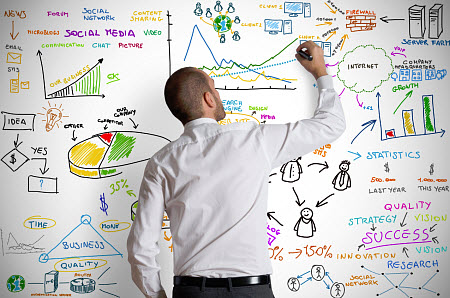 According to the Wipro head of corporate brand and communication, Sachin Mulay, “The IT industry has taken several steps in terms of being present there.” He went on to explain that “The science of marketing has completely changed because of technology and it is rapidly changing.” The technology that we now have at our fingertips is giving us the opportunity to market ourselves individually and personally and to provide customers with customized information. It is also offering the opportunity to provide the ideal information to the right person using an appropriate device at exactly the right time.

Similarly, the Cognizant executive vice president of strategy and marketing, Malcolm Frank, explained that businesses within the IT services arena are experiencing a growing benefit from social media marketing. The reason is that this presence can have an impact on new customers in that they can better understand the way that the company thinks, while it enhances the relationships among the company’s existing customers.