Pebble believes that some of the current wearables that are being released have been overcomplicated.

It is starting to become difficult to find a smartphone or electronics manufacturer that has not either released, unveiled, or at least considered the creation of its own smartwatches, but at the same time, these devices have yet to truly take off.

Many in the industry believe that the rollout of the Apple Watch will bring these wearables into the mainstream.

However, one of the most established brands of smartwatches has now stated that it feels that many of the companies that have attempted to create their own gadgets have actually over thought what the devices should be. Primarily, the difference between a standard wristwatch and the upgraded wearable technology is that it offers a range of additional features aside from telling the time and date, and perhaps even adding a stopwatch or alarm clock option. They tend to bring the user notifications for incoming calls and texts and have controls for music playback, for example.

But as the market for smartwatches becomes increasingly crowded, brands are working hard to stand out. 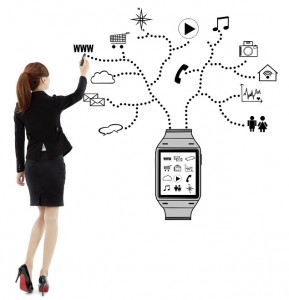 This has caused them to add broad spectrums of new features and options that may or may not be all that appealing to the user. According to Pebble, many of the additional features that are being incorporated into the devices in the name of differentiating them from one another have actually been overcomplicating things. Speaking of the wearable technology devices that have been launched by Samsung and Apple, Monica Isla, a Pebble spokesperson, said that “I think they overthink what people are going to do with them.”

Clearly, it is Pebble’s opinion that smartwatches are great to act as wristwatches that also have additional bonus features such as alerts and notifications, but when all is said and done, the more complex tasks can simply be done on a smartphone, where they will be more convenient and efficient, anyway.

These neon shades are a notable switch from the traditional colors of the company’s classic device.

Consumers looking for a change from the original Gray, Orange, Arctic White, Cherry Red and Jet Black watch colors, or who want a design that is a little more flashy, likely will not be disappointed in the vibrant and bold new color variations. The limited edition watches come complete with matching color bands, which are interchangeable.

However, in addition to the matching color bands, Pebble has provided users with the option of customizing their smartwatches. The company has announced that very soon users will be able to download two new watchfaces at the Pebble appstore. These include an animated Reading Rainbow watchface that features Levar Burton and a weather watchface from The Weather Channel.

According to Pebble’s blog, “Fresh, Hot, and Fly come with matching bands and—just like the rest of the Pebble lineup—are fully customizable with the skins and bands of your choice. We’re having lots of fun mixing and matching bands around between the different colors ourselves.”

Smartwatches from Pebble were first introduced back in 2012.

Pebble began as a Kickstarter project and was developed by Canadian inventor Eric Migicovsky. The project raised over $10 million from the pre-selling of 85,000 Pebble smart devices. In January 2013, mass production of the product began.

Last year, the company began to ship the watches worldwide. According to Pebble it has sold 190,000 globally and its consumers have downloaded 2 million watchfaces and apps. The watch has been well received and is equipped with several features. Aside from changeable watchfaces, it has an up to 7 day battery life, readable daylight display and is water resistant. Also, the company has a second generation Pebble Steel smartwatch that is slimmer, has a scratch-resistant face and has a stainless steel body.

The three limited edition color smartwatches are available for purchase from the company’s official website and cost $150.