IBM and Marchesa partnered to weave cognitive into a special dress worn at the Met Gala.

While wearable technology fashion isn’t anything new, one of the latest tech couture designs to have caught the attention of media was the light lavender dress, which featured over 100 gauzy white roses embedded with color-changing LED lights, worn by model Karolina Kurkova at last week’s 2016 Met Gala. The first-of-its-kind cognitive dress was born from a partnership between Marchesa and IBM. To create the garment, the design house used IBM’s technology and its Watson cognitive system, making it the ideal ensemble for the theme of this year’s gala which was “Manus x Machina: Fashion in an Age of Technology.”

From concept and research and development, to design and finished product, cognitive inspiration was woven into every step of the creative process. According to IBM’s Think blog, the collaboration showcased the creative potential of building with Watson and the technology’s ability to “enhance human imagination.”

The cognitive design of the dress depends on the combination of cognitive tools from IMB Research, Watson APIs, solution from Inno360 (Watson developer partner), and the creative vision from Marchesa’s design team.

The emotions that were selected by Marchesa, which they wanted the dress to convey, were joy, excitement, passion, curiosity, and encouragement. The belief is that color and images can indicate moods and send messages. IBM Research then fed this data into the cognitive color design tool; designed to understand the psychological effects of colors, image aesthetics and the interrelationships between emotions. This process also involved providing Watson with hundreds of images associated with the design house’s dresses so Watson could understand and learn Marchesa’s color palette.

Inno360 was then consulted to source the fabric for the garment, which needed to be made from woven textiles that would respond well to the LED technology that would be required to create the final effect. The team searched over 40,000 sources for fabric information to help it narrow down its options.

When the wearable technology fashion was finally debuted on the Met Gala red carpet, the roses on Kurkova’s dress changed colors based on the emotional responses that Twitter users had regarding the dress. Using Watson Tone Analyzer, the dress extracted context around the tone of the twitter messages. The result was the colors of the dress changed as public conversation around the Met Gala occurred online in real-time. 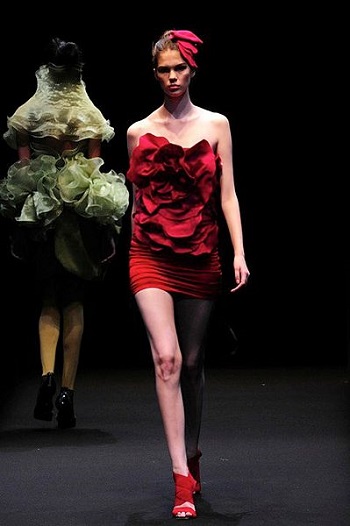