The new application also offers a range of different features such as mini-games, news feeds, and selfie tools.

The Walt Disney Company has now released a new mobile game app with a Star Wars theme that is designed to give users the complete experience, from selfie tools to mini-games, and from news feeds to a number of augmented reality components, among other things.

This free mobile app was released last week and is meant to be the official connection to the brand.

In fact, when Disney released it, they called it “your official mobile connection to a galaxy far, far away.” The mobile game app is free to download and is available for both iOS and Android users. While mobile apps that are tied to movies have a tradition of being so-so, at best, this one at least provides users with a large number of different types of experience and it has been created to keep fans up to date with the very latest at the same time.

The Star Wars mobile game app is meant to keep fans entertained and informed as the new movie release approaches.

Once this mobile app has been downloaded, the user is able to choose from among three different possible themes: Droid, Light Side, and Dark Side. The app runs a countdown to the release of the next Star Wars movie, and has a feed of news relating to the film and the franchise. It also provides users with a library of official videos, sound bites, and images from the animated series and films. The images are apparently of rather poor quality, but users appear to be enjoying the sound board feature.

It is, however, the augmented reality element that is standing out the most in this mobile game app. This is because it allows smartphone and tablet users to project images of characters from the upcoming “Star Wars: The Force Awakens” movie onto the real world around them, when viewed through the device screen. Among the characters that are available include the new BB-8 droid and a stormtrooper. Disney has pointed out that “This app will continue to grow, evolve, and become more powerful than you can possibly imagine.”

The highly popular brand from Mattel Inc. is now making its way into the digital world with an application and microsite.

The American Girl brand from Mattel Inc. has now launched a new mobile app that will allow its users to be able to create virtual friendship bracelets that they can then share with their friends who are also users of the application.

This effort to move into the digital space is also being accompanied by the addition of a new microsite.

Both the mobile app and the microsite’s appearance have been designed to be released in time to draw attention to the new Truly Me doll from Mattel, as well as the accessories line that goes with that product. The website was created with the desktop experiences in mind, but it can also be used on smartphones and tablets. That said, while all of the features may work over mobile devices, the format remains the same as that of the desktop, which can be a turnoff to many small screen device users.

The mobile app is the experience specifically meant for smartphone and tablet users as the microsite is not optimized. 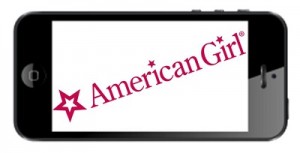 The addition of the mobile application and the website that gives access to the experience to laptop and desktop users has the potential to expand the interaction and interest associated with the Mattel products. It works well with the existing feature of the brand that has been designed to ensure that each doll is seen as its own unique individual.

Every doll has a character that belongs to her alone. She has her own interests, experiences, talents, and her own accessories. This makes it possible for children to be able to personalize and customize their dolls so that they can better identify with them and so that the product will mean more to them. American Girl strategically leverages the activity of playing with a toy in real life as well as using a computer or video game, in order to enhance the meaningfulness of the experience with the brand.

By making a mobile app and a desktop microsite, American Girl will appeal to consumers who use either or both of those digital platforms.