This year is helping to prove that smartphone shopping is growing quickly, but is still a fraction of the whole.

A new industry forecast has been released by eMarketer with regards to retail mobile commerce and its predictions that this channel for shopping will grow in size by 37.2 percent, to reach $57.8 billion, when compared to having been $42.1 billion last year.

The projections also showed that they expect mcommerce to reach $132.7 billion by the close of 2018.

In 2014, mobile commerce in the United States will make up about one fifth of all retail online shopping in the country. However, at the same time it will make up only 1.2 percent of the total retail sales. Therefore, while the report from eMarketer does show that while this channel is having a growing impact on the sales that are occurring on the internet, when it comes to the actual sales made as a whole, it still represents only a tiny sliver.

Included in this mobile commerce estimate are products and services ordered online on a smartphone or tablet.

That said, it does not include the purchase of travel reservations or event tickets in these statistics. In 2014, the report predicts that tablet commerce will make up nearly two out of every three mobile based sales. This is also expected to rise to account for 75 percent of the sales over these devices by 2018. This aligns with the predictions that have been made by previous studies from a range of different sources, which indicated that tablets are the preferred shopping device of mobile consumers when it comes to actually making a purchase.

The mobile commerce research has predicted that sales online (over mobile or PC) will increase by 15.5 percent, this year, to bring them to $304.1 billion. This is an increase over last year’s $263.3 billion. Growth in sales online will make up more than 20 percent of the total retail sales increases in 2014, said the repot. However, at the same time, it also indicated that it will make up only 5.8 percent of the American retail sales total of $4.7 trillion for this year. That figure should grow by nearly 9 percent by 2018. 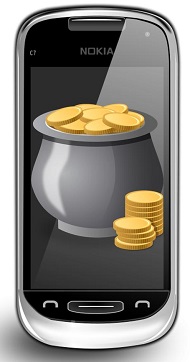