A study in March 2014 has shown that income from smartphone based site visits on optimized sites has spiked.

According to the results of the analysis of mobile commerce data by Branding Brand, major retailers have seen a tremendous increase in the revenue that is generated by their sites that are optimized for smartphone users.

The data also showed that there has been considerable growth in smartphone visits and orders.

The leading mobile commerce platform’s analysis was released in the form of its own Index for March 2014. It revealed that major retailers are seeing an important increase in the traffic, orders, and revenue that is being generated over smartphones through websites that are optimized for those smaller screens. This data was a comparison between the figures that were being seen in March 2013 with those that were recorded last month.

The most recent m-commerce report provided insight into the use of the channel by consumers and underscored trends across a stead client sample within a range of industries that included health and beauty, apparel, and home products. This report provides information from the most data available on commerce websites that are optimized specifically for smartphones in comparison to those sites that are not optimized and that receive traffic from both desktop computers and mobile devices.

The Branding Brand Mobile Commerce Index revealed a number of different year over year comparisons for eighteen major retail clients that they tracked throughout the twelve months leading up to March 2014. They included the following comparison between March 2013 and March 2014:

At the same time that the progress was made over mobile commerce websites, the share of desktop visits decreased within that year by an estimated 21.1 percent. The co-founder and CEO of Branding Brand, Chris Mason, consumers are not only using their smartphones more for shopping, but also for purchasing. 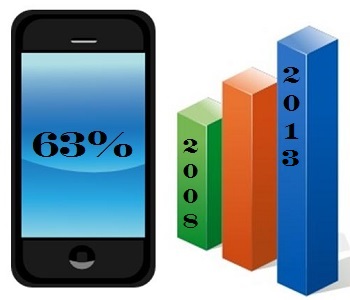