The fast food chain has revealed that its customers are able to place orders right from their wrists.

Domino’s Pizza has now announced that its customers can use their Android Wear and Pebble smartwatch devices to be able to make and track their orders to have food ready for pickup or to be delivered to them.

Pebble owners have already been able to use this wearable technology feature, but Android Wear is now joining in.

This is only the most recent effort in a broader strategy that Domino’s has been implementing in order to boost the digital ordering capabilities for its customers. The smartwatch ordering system is on top of options that already exist for customers to make orders online through their laptops or even their smartphones and tablets. The launch of the option for more wearable technology reflects the preparation that the company is making for when those devices become more mainstream – which they are expected to do throughout this year and beyond.

The company’s move into more smartwatch ordering options has made it feel like a mobile commerce business. 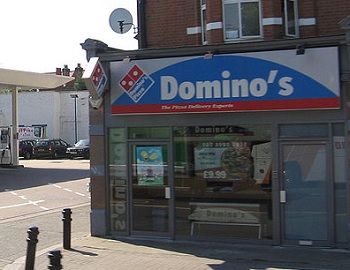 According to the vice president of multimedia marketing at Domino’s, Dennis Maloney, “We really think of ourselves in a lot of ways as a tech company—we’re almost an e-commerce company that sells pizza.”

For customers who want to use the service, they need to have either a Pebble or an Android Wear smartwatch onto which they have downloaded the Domino’s app. They will also need to have a recent order already saved on their profile. This can have been created through a previous order that was made using a smartphone or tablet, for example.

The digital orders can then be re-made by the wearers of smartwatches, through their wearables. This next step into digital orders is an important one for Domino’s, which has found that the online and mobile app experience that they provides them with a larger checkout rate and a boost in their customer satisfaction. Maloney explained that “Digital orders are more profitable and get a better product mix”, as customers are able to see a broader selection of available products when they look them up online or through an app, than they would if they called in their orders over the phone.